Look, fossils! I promised you there’d be dinosaurs on the blog again eventually.

So, for four weeks during the end of August to the middle of September I participated in the fifth field season of the Korea-Mongolia International Dinosaur Project, led by Dr. Yuong-Nam Lee of Korea. The expedition truly was international – we had representatives from Korea, Mongolia, China, Japan, the United States, Argentina, Denmark, and Canada. There were mornings when I was not sure whether to say hello, anyung haseyo, nihao, sain bainu, or whatever.

The first week or so the “Canadian mafia” were out on our own in the Nemegt Basin, until we joined up with the rest of the crew. The photo at the top is of a partial oviraptorosaur skeleton I found on my first day of prospecting. The Gobi totally spoils you – there are few days where you don’t find something interesting.

The Nemegt locality has outcrops of two geological formations, the Nemegt Formation and the Baruungoyot Formation. For a really good review of the geology of the Gobi, I suggest borrowing a copy of “The Age of Dinosaurs in Russia and Mongolia” from your local academic library, if they have it, or look it up on Google Books. Otherwise, it’s available on Amazon, although quite expensive. The Nemegt Formation tends to be a lighter tan or buff colour and represents fluvial systems, whereas the Baruungoyot is the deep red that many people associate with the Gobi and was likely more lacustrine and duney. Both formations are Late Cretaceous in age. The photo above shows Nemegt Formation outcrops. 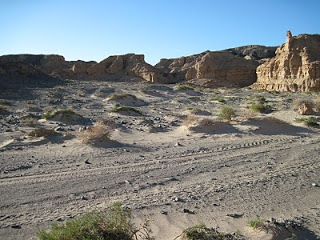 Here’s an example of the Baruungoyot Formation a few kilometres away from our camp. It’s a very dramatic set of outcrops.

The walk back from the Baruungoyot was long and hot. Premji and I attempted to hitchhike, but sadly there was nobody to pick us up. We did see some camels once we got back into the canyons, although I don’t think they would have been thrilled if we had tried to ride them home.