I found myself in Victoria, British Columbia for the day, and spent some time wandering around the Royal BC Museum. Although many people don’t associate Vancouver Island with abundant fossils, there are many palaeontological treasures to be had…here’s a few highlights:

This unusual bleb of rock is actually a tooth from a very strange type of animal called a desmostylian, and this species is called Cornwallius. There’s nothing really like desmostylians today. They’re related to proboscideans (elephants) and sirenians (manatees), but look more like hippos crossed with sea lions. They lacked flippers but lived an aquatic lifestyle. Here’s Wikipedia’s interpretation of what they looked like:

In short, they are highly unusual animals that certainly do not get enough play in the land of palaeo promotion. (Also, I may have a new favourite genus name – a related animal called Vanderhoofius. So awesome!) Cornwallius is a desmostylian from the Sooke Formation of Vancouver Island. Some Cornwallius specimens from Vancouver Island have even made their way into the Smithsonian…

Elsewhere in the museum is a nice temporary exhibit showcasing the ‘behind the scenes’ aspect of museums, with lots of interesting specimens on display from each of the Natural History departments. 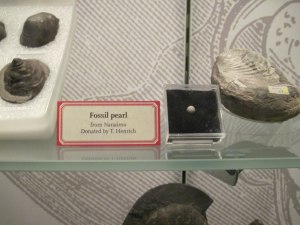 Something I had been wondering about for some time was whether or not pearls could fossilize, and if so, why we weren’t finding them in the fossil record. I now have an answer – they CAN, and we DO. How neat is that?

And finally…mammoth! With real ice!