I’m happy to announce the publication of another new Korean dinosaur, Koreaceratops, by my friends and colleagues Yuong-Nam Lee, Michael Ryan, and Yoshi Kobayashi.

This little fellow was actually discovered very close to where I spent much of my summer this year, at Jeongok Harbour in Hwaseong-si (somewhat close to Jebu-do). Koreaceratops is diagnosed by some features of the ankle as well as the tall, deep tail. It’s a beautiful specimen even though it lacks a skull – here’s hoping that a head is found sometime!

The Dinosaur Egg Visitor Centre in Songsan has a nice model of a protoceratopsian with eggs and hatchlings, which I suppose we can now call Koreaceratops! There’s also a bit of information on the specimen, although the actual fossils are not on display. You can, however, take a look at some fossil eggs both in the centre and a short walk away in situ.

I also wanted to post some pictures of the other Korean dinosaur named a few weeks ago, Koreanosaurus. I love the life reconstruction that was made for this guy! 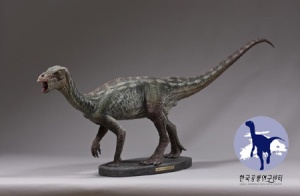 3 thoughts on “Another new Korean dinosaur!”