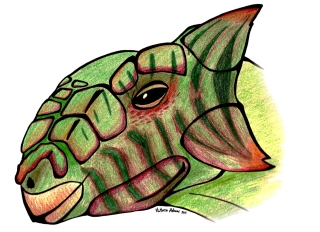 Say hello to Euoplocephalus, the best known ankylosaur you’ve never heard of. Besides Pinacosaurus from Mongolia and China, there are more specimens referred to Euoplocephalus than to any other ankylosaurid, and it is certainly the most well represented ankylosaurid from North America. Yet Euoplocephalus often gets overlooked because its younger cousin is THAT ankylosaur, the one that starred at the World’s Fair and was in Jurassic Park III and Clash of the Dinosaurs and Dinosaur Revolution and gets all the cool toys and, you know, is the namesake of the group. You know, Ankylosaurus. Well, hopefully you’ll be hearing more from me about Euoplocephalus over the coming months. Today we’ll be picking its nose.

Ankylosaurs are kind of weird as dinosaurs goes, because they get rid of things like the antorbital and supraorbital fenestrae, and tuck the laterotemporal fenestrae back behind the squamosals and quadratojugals. In a sense, the windows to the skull are all closed, and so it’s hard to see some of the internal features that are more visible on other dinosaur skulls. Our new paper describes UALVP 47977, a busted up Euoplocephalus skull from Dinosaur Provincial Park. Normally, busted skulls don’t appear very exciting, as important pieces might be missing, and they don’t make very good display specimens. In this case however, UALVP 47977 gives us more information because it is broken! This specimen shows off details of the braincase and nasal passages that we don’t typically get to see, including impressions of blood vessels.

I am trying (slowly but surely) to sort out the mess that is the genus Euoplocephalus, and so I was interested in comparing UALVP 47977 with other skulls to see if any of its features were present in other skulls. The only other skull that is naturally broken in a similar way is AMNH 5238, and it looks pretty similar – it even has blood vessel impressions in the same place (this specimen is also super cool because it has ciliary osteoderms, or, bony eyelids!). I was delighted when Dr. Larry Witmer made the CT scans of AMNH 5405 available on his website following the Witmer and Ridgely (2008) publication on paranasal sinuses. I also made arrangments to CT scan UALVP 31, one of our ‘classic’ University of Alberta specimens.

With CT scans in hand, I went through the process of eliminating matrix from the inside of the nasal passages (in essence, picking their noses), so I could examine the skull roof of these two specimens. This process is called segmentation, which means that you place a ‘mask’ over the parts of the CT scan that you want to appear in the 3D model, and remove the mask where you don’t want something in the model. Although the software we use, Mimics, has lots of tools to help speed up the segmentation process, with fossils sometimes the contrast between bone and stone is not very great. As a result, sometimes you just have to go through the CT scans slice by slice and trace out by hand what you want to keep. This is super tedious work at times and I have the utmost respect for the amazing 3D visualizations that come out of Dr. Witmer’s lab. Eventually we invited Dr. Witmer to collaborate on the paper with us, but I think it was good that we were able to independently test their 3D model using different software and fresh eyes, a sentiment echoed over on the WitmerLab blog.

The segmentation process begins! All of that uniformly-dense stuff in the palatal area has to go. The green ‘mask’ will be eliminated wherever there is matrix instead of bone, leaving only the bone in the 3D model.

I won’t go into too much detail on the paper here, but I will say that this was a tough but very interesting project to work on. I’ve learned a lot about braincases and brains and noses over the course of writing this manuscript, but I’m sure I’ve still got more to learn. I’ve definitely had a lot of moments where I felt pretty stupid for not knowing certain things, but I think perhaps part of science is getting outside of your comfort zone. Ankylosaur tails are good, but skulls are pretty fun too, and I hope I can share some more skull papers with you soon!

And check out the post over at Pick & Scalpel, which has more information and some great images! An armored dinosaur gets a second opinion—and the crazy-straw nasal passage survives!

…and finally, because this has certainly helped me sometimes:

Schwartz MA. 2008. The importance of stupidity in scientific research. Journal of Cell science 121:1771.