The University of Alberta is currently hosting an exhibit called Harry Potter’s World: Renaissance Science, Magic, and Medicine, in the John W. Scott Health Sciences Library. Let’s Talk Science, a Canadian science outreach organization with a U of A chapter, was asked to organize ‘classes’ for a Harry Potter-themed science day, so my good friend Scott Persons and I put together “Care of Magical Creatures”. You may think it would be hard to mix magic and mythology with science, but we were pretty happy with how much natural history education we were able to convey over the course of the day. For those interested in science outreach and education, here’s how to do your own Care of Magical Creatures class. You might be surprised by the results!

First of all, I cannot thank enough the other BioSci grad students who volunteered to help us out during the day. We handled around 1400 people in 5 hours and it was BUSY. Everyone did a great job and we all had a lot of fun even if we mostly lost our voices by the end of the day. You might notice that the room we occupied was pretty small – in some ways this was good because it allowed for a controlled (sort of) number of people at any given time, but we also ran out of air pretty quickly. There were numerous other ‘classes’ held in small rooms like this – an Owlery featuring a burrowing owl from the local wildlife rescue, Ollivander’s wand shop, Muggle Studies (DNA extraction), Potions (chemistry), Herbology (botany), and many more I can’t remember right now.

For Care of Magical Creatures, Scott and I chose a variety of extant and extinct specimens from our zoology and palaeontology collections, using animals that either inspired mythological creatures or that resembled them in some way. We are very lucky to have access to a lot of good specimens, but if you work in a museum or university you might have access to a lot of similar items for your own workshop. We also tried to feature a lot of the animals from Harry Potter, although we didn’t get everything and we had some animals that weren’t mentioned in the books. Above is a golden pheasant taxidermy specimen; the golden pheasant is one of the possible inspirations for the phoenix.

Elephant skulls probably inspired the legend of the cyclops. At this station we also had a Protoceratops skull, which may been the inspiration for the griffin. 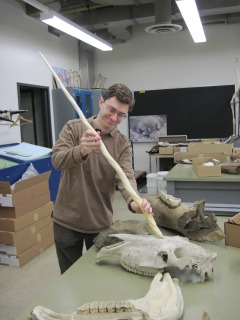 Scott makes a unicorn! The narwhal tusk was a big draw, and also allowed us to talk about conservation and how we acquire zoological specimens.

The manatee skull was also a big surprise to many people – you’re looking at the face of a mermaid. We also had a mosasaur skull and real mosasaur jaw at our ‘aquatic animals’ station. Scott had the great idea to print out some double-sided cards with the mythological creature on one side and the real animal on the other – we would flip over to the real animal after the kids tried to guess what it was. Very helpful when you only have a skull of an unfamiliar animal! 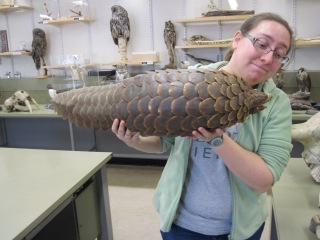 For our dragon station, we used animals that had dragon-like qualities, since no one animal is the direct inspiration for the dragon, and because many cultures have their own dragon mythology. We used a cast of the ankylosaur Minotaurasaurus (which looks like the Hungarian Horntail), a komodo dragon skull (a real life dragon!), and our wonderful taxidermied ground pangolin. Not a single person who visited our table had ever seen or heard of a pangolin, so it was a really great opportunity to show off this unusual mammal. 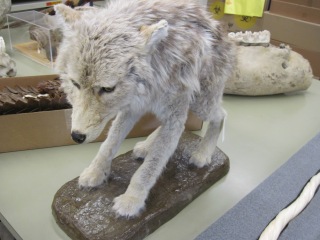 We also had a werewolf station with our very weird coyote with a degenerative spinal disease, a grey wolf skull, and a dire wolf skull.

Finally, the platypus was used as an example of a chimaera-like animal. 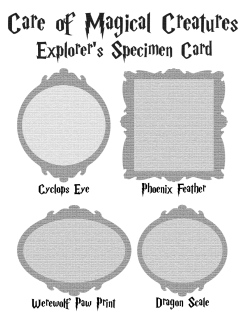 In order to make the activity a bit more hands-on and interactive, we also gave the children a ‘specimen card’ I had made up. They needed to find all four items, and at the end we had a table with glue bottles for sticking the specimens on. We purchased enough supplies for 1000 people, and in total it cost about $180 CAD to buy:

(Edit: I forgot to mention that this also covered printing 1000 copies of the explorer’s card, with two per page, on heavy cardstock.)

Our “Care of Magical Creatures” workshop allowed us to talk about not only the real-life inspiration for mythological and magical creatures, but also animal anatomy and functional anatomy, ecology, evolution, and conservation. I’d love to use this workshop again sometime even without the whole set of classes that were available at the event.

Have you ever tried a Harry Potter-related science workshop? Tell me about it in the comments!

3 thoughts on “Care of Magical Creatures”