Well, a lot has happened since the auction of a nearly complete Tarbosaurus was halted last May. At the end of December, Eric Prokopi surrendered his claim to the Tarbosaurus and other Mongolian and Chinese dinosaur fossils in his possession, and pleaded guilty to several charges surrounding the Tarbosaurus case. The Mongolian government is renewing its commitment to preserving its outstanding natural history heritage by creating a new dinosaur museum in capital city Ulaanbaatar, and several museums elsewhere in the countryside. 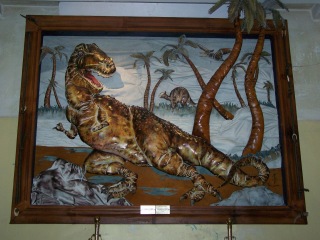 I hope the awesome leather Tarbosaurus makes the trip to the new digs.

Most recently, Paige Williams wrote an excellent article for the New Yorker interviewing many of the people involved in the Tarbosaurus case, including Prokopi. “Bones of Contention: A Florida man’s curious trade in Mongolian dinosaurs” was an illuminating read for me, despite having followed the case closely. A few things struck a chord with me, because I was surprised by some of the attitudes displayed by people who are otherwise portrayed as ‘passionate’ about paleontology.

Prokopi started out as what seems like a pretty avid rockhounder and fossil buff growing up in Florida. Indeed, several previous news stories have portrayed Prokopi as simply doing what he loves. After university, he began selling fossils full time. He cleaned fossils, and sold small items to museums and nature centres. For the most part, this seems like pretty legit stuff. But then Paige quotes Prokopi: “One thing I was wondering is if any of these paleontologists you’ve talked to have given their argument of why paleontology is important…[fossils are] just basically rocks…It’s not like antiquities, where it’s somebody’s heritage and culture and all that.”

You can’t have it both ways. You can’t call yourself a ‘commercial palaeontologist’, co-opting the name of a scientific discipline, and then turn around and question the purpose or validity of palaeontology.

Later, Paige quotes Prokopi’s wife Amanda: “And for what? For bones? No one’s been murdered. We restored a dinosaur.” 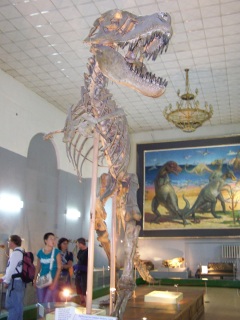 Tarbosaurus on display at the Mongolian Natural History Museum, in 2007.

So look, I get it. Stealing a dinosaur isn’t as bad as murdering someone. And no, palaeontology isn’t curing cancer or finding renewable energy or solving world conflict or any of those big-ticket items. But I’d like to think we live in a world where we don’t have to funnel all of our resources into just the absolute bare minimum required to survive. I’d like to think that we have it in our hearts and our minds (and our pocketbooks) that we can study things that do not have immediate, direct, tangible, GIGANTIC benefits. I’d like to think that we live in a world where understanding nature and evolution and animals and biodiversity and our planet are TOTALLY OK things to spend one’s time thinking about. Stealing a dinosaur doesn’t have to be as bad as murder to still be a crime, and palaeontology doesn’t have to cure cancer in order to have value.

I don’t know what the take-away message from this post is, but I guess all of us in palaeontology and other sciences need to keep talking to the public, keep talking to policy makers, and keep trying to inject some enthusiasm for curiosity, exploration, and critical thinking into our everyday worlds. That’s not too big a task, right?