In contrast, a very unusual specimen (ROM 813) has a completely different morphology. This specimen includes unusual long, rectangular osteoderms that aren’t present in NHMUK R5161. The scales are on average much smaller, don’t form much of a rosette pattern around any of the osteoderms, and are more uniform in size overall. ROM 813 is a little bit difficult to interpret because it is partially disarticulated (which is also intriguing given that such large portions of the integument are intact), but our best guess for the preserved portions is shown here. 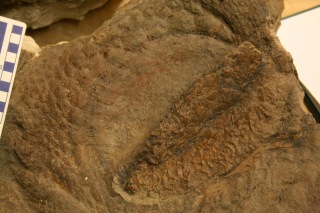 Moving over to Mongolia, a specimen referred to Tarchiagigantea lacks the small pavement of ossicles seen in the Albertan ankylosaurs, and the epidermal scales are huge and more rectangular. In the portion of the integument preserved, osteoderms are separated by only one row of scales.

There’s enough overlapping material between these specimens to allow us to compare scale patterns among different ankylosaurs, and the differences support the hypothesis that these are different taxa. Unfortunately, right now we can’t assign ROM 813 to any known ankylosaurid taxon from Alberta – this could represent the postcrania of Euoplocephalus tutus, or Dyoplosaurus acutosquameus, or (less likely) a new taxon of ankylosaurid from the Dinosaur Park Formation. I think it’s safe to say that the differences between Scolosaurus and ROM 813 represent true taxonomic differences, a finding that is in line with previous work by Phil Bell on scalation differences between Saurolophus angustirostris and Saurolophus osborni. 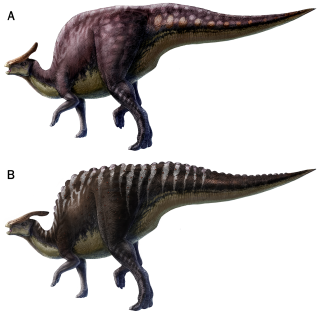 Illustrations by Lida Xing and via PLOS ONE.

One more comment about ankylosaur skin: In 2010 I had the opportunity to study the holotype of Liaoningosaurus paradoxus, and very interesting little ankylosaur from the Liaoning Formation of China. The original authors described Liaoningosaurus as possessing a ventral plastron (bony shield, like that found in turtles), which would have been a highly unusual anatomical feature given that no other ankylosaurs possess a plastron. Having looked at this specimen, I think a better interpretation for the plastron is that this is a segment of skin impressions from the belly region – there didn’t seem to be any bony texture around the edges of this area, and the pattern is more consistent with scales than any osteoderms in other ankylosaurs.

Belly scales for Liaoningosaurus. The scale bar is in millimetres.

Arbour VM, Lech-Hernes NL, Guldberg TE, Hurum JH, Currie PJ. 2013. An ankylosaurid dinosaur from Mongolia with in situ armour and keratinous scale impressions. Acta Palaeontologica Polonica 58:55-64. Many thanks to Dr. Hurum for inviting me to help describe this specimen!