A few weeks ago I was really excited to be contacted by Danielle Venton, a freelance writer working on a piece for Popular Mechanics about the biology of Godzilla! With a new big-screen appearance by Godzilla right around the corner, I thought this was a fun exercise in speculative biology. The piece is out now at Popular Mechanics and I highly recommend checking out “The Impossible Anatomy of Godzilla“.

I’ve always been a fan of B-movies (especially ones that have been MST3K‘d) and monster movies, so, in preparation for the new Godzilla film, I’ve been trying to brush up on my kaiju history. Perhaps unfortunately, my introduction to Godzilla was with 1998’s TriStar film, which seems to be uniformly considered not that great an entry into the monster’s filmography. In the process of helping out with Venton’s piece about Godzilla, I also came across some really fun previous discussions of Godzilla’s anatomy. I heartily recommend checking out Darren Naish’s “The science of Godzilla, 2010” and “The anatomy of Zilla, the TriStar ‘Godzilla’” over at Tetrapod Zoology, and Brian Switek’s “What kind of dinosaur is Godzilla?” over at Smithsonian.com.

[Some of what I find is very silly. Godzilla flies using his rocket breath in Godzilla vs. the Smog Monster!]

Most discussions of Godzilla’s anatomy use dinosaurs (for classic Godzilla) or lizards (for Zilla) as starting points, and it’s generally understood that the original Godzilla design was a melding of an Allosaurus, Iguanodon, and Stegosaurus. However, it occurred to me that another group of diapsids might serve as plausible candidates for Godzilla’s heritage: the pseudosuchians (or crurotarsans, if you prefer)!

Today’s only living pseudosuchians, the crocodilians, have osteoderms in their skin, if somewhat less flamboyant than Godzilla’s. The ‘scale’ pattern on their heads is actually formed through cracking of the skin during development, resulting in a texture similar to what’s seen on Godzilla’s body, which in turn is apparently supposed to resemble the keloid scars of nuclear explosion survivors. 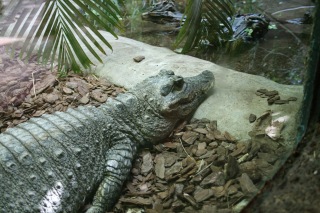 All living crocodilians are aquatic quadrupeds with powerful tails, and Godzilla seems to be a pretty good swimmer using his tail as a propulsive mechanism. Although many pseudosuchians were quadrupeds, some, like the poposauroids, were bipedal! Pseudosuchians seemed to have typically retained most fingers on the hand, like Godzilla, but unlike most theropod dinosaur lineages.

As far as I know, and I certainly haven’t done a thorough literature search on this, there are no known pseudosuchians with nuclear breath….but alligators can produce a mighty bellow during breeding season.

Could Godzilla represent a long-lost and enigmatic lineage of pseudosuchian? Should there be a Godzillasuchus? Tell me what you think in the comments!