I’m back in civilization, so let’s get back to ankylosaurs! Ready Set Go!

Shamosaurus is a really interesting ankylosaurid from the Zuunbayan Formation of Mongolia. Unlike later ankylosaurids, it still has a relatively long snout like you see in basal ankylosaurs and nodosaurids, and it lacks the distinctive tile-like skull ornamentation of ankylosaurs like Euoplocephalus or Saichania, instead just having a granular, pebbly texture on the skull surface. Gobisaurus, from the Ulansuhai Formation of China, is nearly identical in appearance, and only a few features distinguish these two taxa, namely the length of the tooth row relative to skull length and the orientation of the pterygoids. (Indeed, I think you could make an argument for subsuming Gobisaurus into Shamosaurus as Shamosaurus domoculus, but I’m generally reluctant to start making new combinations given that generic separation is pretty arbitrary anyway.)

Shamosaurus and its too-cool-for-school cervical half rings, on display in Moscow.

Zhongyuansaurus was originally described as a nodosaurid ankylosaur partly because of its long snout, but it’s indistinguishable from Gobisaurus (except for being smashed and flattened). The holotype is also a subadult (or at least not fully skeletally mature), since some of the cranial sutures are still visible towards the back of the skull. There are some interesting things going on with the postcrania of Zhongyuansaurus, but that’s a story for a few weeks from now so STAY TUNED NO SPOILERS IF YOU’VE READ MY THESIS.

Of all of the more obscure ankylosaurs I looked at during my PhD, Tsagantegia might be my favourite for being the most surprising in person compared to what I had read about it. Tumanova included a line drawing of the specimen in her original description, which has been oft reproduced, but interestingly it doesn’t really do justice to the original specimen (despite being a pretty nice drawing). The line drawing shows a long-snouted ankylosaur with amorphous cranial ornamentation, not dissimilar to Shamosaurus, but with a wider premaxillary beak more typical of later ankylosaurs. In person, however, the skull has distinct cranial caputegulae like we see in Euoplocephalus and Ankylosaurus! It’s a pretty cool ankylosaur and I think it’s probably really important to understanding the dispersal of ankylosaurs from Asia into North America and the diversification of ankylosaurids in the Campanian-Maastrichtian of Asia, but it’s really hard to pin down the age of the Bayan Shiree Formation, and we don’t have any postcrania for this taxon. I’m sure I’ll be revisiting this guy in the future. 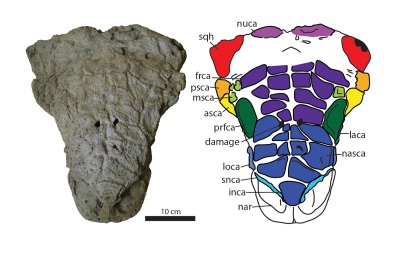 Here it is again but in a more different view!

Way back when I originally started this blog in 2010, I had travelled to Korea to spend some time working in the Hwaseong paleo lab preparing Talarurus material and generally studying the ankylosaur material they had collected from the Gobi. Talarurus, like Tsagantegia, is also from the Bayan Shiree Formation but is clearly distinct. The holotype skull has very subtle cranial ornamentation that takes the form of small cones, rather than flat hexagonal tiles like Euoplocephalus, or bulbous pyramids like Saichania. Weirdly, this configuration is also present in the North American taxon Nodocephalosaurus – either this ornamentation style has convergently evolved, or, as I recovered in my analysis, these two taxa are closely related despite being fairly widely separated geographically and temporally. This is another ankylosaur that I’m sure we’ll talk about again.

Talarurus butt in Moscow. The skeleton on display is a composite of several individuals from the same locality, and the skull is totally sculpted and a bit out of date.

Here’s the holotype skull, with its weird, weird ornamentation.

I’ve talked about Saichania fairly extensively here last year, but there were a few new things added in this most recent paper: Tianzhenosaurus and Shanxia (both from China) are, most likely, junior synonyms of Saichania, making this the most geographically widespread of the Asian ankylosaurids. Tianzhenosaurus has a nearly identical cranial ornamentation pattern when compared to Saichania, and I couldn’t identify any differences that were outside of the usual ornamentation pattern variation we see in something like Euoplocephalus. Shanxia is known from the same formation but from a less well preserved skull, but the morphology of the squamosal horn is consistent with that of both Tianzhenosaurus and Saichania and therefore it probably represents the same taxon.

Next up: what’s the big picture here, anyway?

5 thoughts on “Know Your Ankylosaurs: Mongolian Odds and Ends Edition”