A few weeks ago I took a road trip down to visit the smaller Arbour sibling who is currently based at the University of Washington, and we made a point of visiting the Burke Museum on campus. The museum is about to be on the move, so in a couple of years this post will be out of date – despite it getting some shiny new digs in the near future, it’s still a pretty impressive museum for a university campus, and it has some unique treasures! Let’s get to it!

The first surprise is a secret Canadian plesiosaur! This is a cast of the Puntledge River Elasmosaur from Vancouver Island.

But never fear, there is one home-grown dinosaur fossil in the Burke – a partial theropod limb bone representing the only known dinosaur material from Washington. It’s a big fellow and a cool find, especially given how rare dinosaur material is from the west coast of North America. 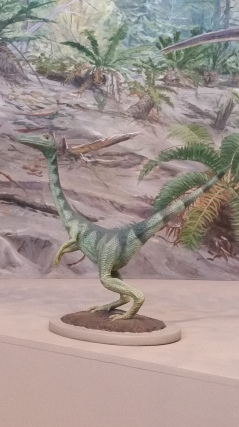 I enjoyed these charming retro models of early little dinosaurs – here we have Ornitholestes (sans nasal crest!), Heterodontosaurus on a diet, and Compsognathus having a bad back day.

My very favourite fossil in the museum is this totally outrageous whole-body rhino cast. This poor rhino (possibly something like Diceratherium, based on jaw fragments found within the cavity) was standing (or floating) in a lake when it was entombed by pillow basalts (basalts that have cooled slightly, forming a crust on the outside, after contacting water). One cooked rhino later, and we’ve got a rhino-shaped void in volcanic rock with a few bones remaining inside, and one utterly bizarre and textbook-defying fossil. (While reading up on this fossil I found another example of a rhino fossil in volcanic rocks; rhinos seem to have bad luck I guess?)

Fossil whales are also pretty great and this fellow JUST got named a few weeks ago! Meet Sitsqwayk, a chaeomysticete whale – an early representative of the baleen whales, at a time in their evolutionary history where they were just losing their teeth and switching to baleen instead.

Although much of Washington’s geological history is represented by volcanic and igneous rocks, there were plenty of weird and interesting fossils on display here, and I recommend checking this place out before it moves to its new home! (There’s also a nice collection of Pacific rim art and cultural artifacts, too!)

Bonus fake dinosaur! We went to the Star Trek exhibit at EMP and got to see Gorn! 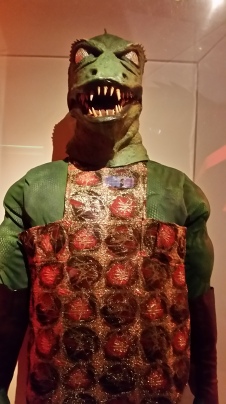 Bonus real biology! Our road trip took us up through the mountains of British Columbia and Alberta, and at our stopover point near Mt Robson we camped next to spawning salmon. One of the world’s great migrations, and a special sight to see.

One thought on “Rhinos and dinos and whales, oh my!”