Welcome Ferrisaurus sustutensis, the Iron Lizard from the Sustut River!

Many thanks to Raven Amos for permission to use her wonderful leptoceratopsid illustration for publicizing this research!

But for a long time now, I’ve known this dinosaur as just Buster. Buster and I go way back – in fact, this specimen was in many ways the project that opened the door to my current position. I owe it a lot.

The year is 2005 and I am but a wee baby palaeontologist working towards a BSc at Dalhousie University. Kenny Larsen, a retired geologist, donates a box of bones to the Department of Earth Sciences, and some of the professors ask if I’d like to figure out what they are for my honours thesis project – I was OVER THE MOON and so excited. That project wound up being my first published paper, along with my honours supervisor Milton Graves; we also arranged for it to be transferred from Dalhousie University, which doesn’t really have a palaeontology collection on campus, to the Royal BC Museum, where it could be reposited in the province it originated from. Buster is fragmentary and I didn’t have a lot of experience under my belt, so we got the identification down to ‘small ornithischian possibly like Thescelosaurus or a pachycephalosaur’, but couldn’t narrow it down further than that.

Me, circa summer 2005-ish, doing some minor prep on the tibia with my fancy new magnifying lamp, wearing a necklace of a Stegosaurus made out of moose antler, also with essentially the same hairstyle I wear today, oh god where did the years go.

For years I wanted to go look for more of Buster in the Sustut Basin, a big Cretaceous terrestrial basin in north-central British Columbia, but the expense and logistics were too difficult and my time was spent engrossed in the prickly world of thyreophoran taxonomy. But when I started to plan out an NSERC postdoc on dinosaur biogeography with David Evans at the ROM in 2015, he suggested that a visit to the Sustut might be a good fit for my project, and that it might be worth revisiting Buster to see if we could figure out what it really was.

So lo and behold, in 2017 I got some funding from the National Geographic Society and the Dinosaur Research Institute, and we headed off to the Sustut River to look for dinosaurs – sadly, we didn’t get more of Buster’s skeleton, but we got some pretty good evidence that we found the exact spot it was discovered back in 1971, and brought back plant and turtle fossils. 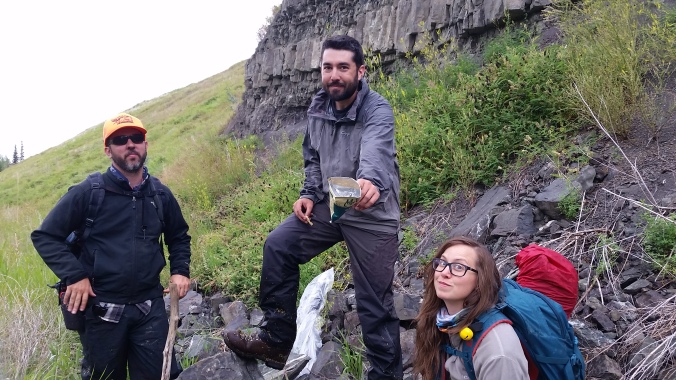 My very favourite photo from the Sustut Basin 2017 expedition, with David Evans (left), Tom Cullen (centre), and Jade Simon (right). I had made us walk like 7 km in a hurry through extremely wet abandoned railway tracks to what should have been a very promising outcrop. There were zero fossils. We named it Arbour’s Bluff and ate some chips.

Meanwhile, David and I were working up a paper redescribing Buster not as a thescelosaur or pachycephalosaur, but instead as a leptoceratopsid – a much better fit for the bits and pieces of the skeleton that we had. As we collected more data on other leptoceratopsids, we noticed that Buster had some features that were distinct from the other known species – the proportions of the toes and forearm to hindlimb were subtly different. Although fragmentary, we felt that these differences were distinct enough to mark Buster as a unique species, and we couldn’t really fit the specimen into any of the existing leptoceratopsid genera. Ferrisaurus sustutensis was born.

Out with the old, in with the new. First attempt at a Buster skeletal diagram from 2006 at top, 2019 interpretation below.

And during all of that, I got my job as the Curator of Palaeontology at the Royal BC Museum, where Buster has been hanging out for the last decade since I published the original description in 2008. Life flows in funny circles sometimes.

Anyway, a moral for this story for folks at the beginning of their palaeontological journeys: get yourself mentors who will support your interests, tell them what you want and need, and say yes when someone hands you a box of fossils and says ‘figure out what this is’. Good luck out there.

3 thoughts on “The Iron Lizard”