Last fall I visited the newly-opened Jurassic Forest and enjoyed it very much. However, because winter arrives early in Edmonton, the leaves had already fallen and the dinosaurs were quite snowy! Today I spent some time showing off ankylosaur fossils and casts with visitors at the forest, and had a chance to see the dinosaur trails in their summer greener. Here’s a few new photos from the forest! 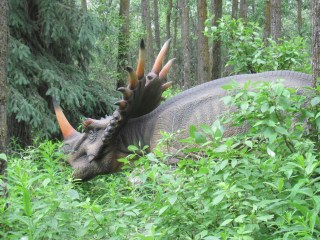 Styracosaurus looks like it’s in its natural environment. END_OF_DOCUMENT_TOKEN_TO_BE_REPLACED

I’m back from a vacation to visit various family members scattered around the globe, including a stop in Toronto. It was time for a long overdue visit to the Ontario Science Centre, which I hadn’t visited since I was in my early teens, but which was one of my very favourite places when I was younger.

The Ontario Science Centre was built in 1969 and was a pretty revolutionary place at the time, as instead of the stereotypical ‘static’ museum displays pretty much everything was hands-on in some way. There are great exhibits on astronomy and the human body, an indoor rainforest with some really cool poison dart frogs, a fin whale skeleton, and the Science Arcade, which is probably one of the most fun science exhibits to play in. END_OF_DOCUMENT_TOKEN_TO_BE_REPLACED