The countdown is really on, now!

Here’s a few shots of my previous visit to Mongolia, in August 2007. I feel very lucky to be able to have a second visit to such a wonderful place!

The ankylosaur bonebed Aleg Tag has produced many elements of Pinacosaurus, a small and unusual dinosaur. Unfortunately, the bonebed had been poached before we got there – you can see the small crater-like depressions where bones had been ripped up. 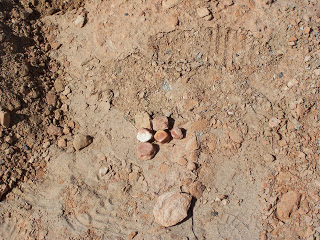 There were a few bones in the quarry. The Aleg Tag bones have a very rich red colour. This image shows a bunch of caudal centra that were lying around.

A slightly more impressive ankylosaur specimen is this nearly complete skeleton of the very spiky Saichania. This is definitely one of my all-time favourite ankylosaurs (oh, who am I kidding, I like them all….).

But Mongolia is much more than just ankylosaurs. The highly unusual and very small Mononykus was another treat to see while in Ulaanbaatar. Note that there is only a single huge claw on the hand!

I previously showed a photo of a cast of the Deinocheirus arms from my visit to Poland, but here are the real deal (with zombie paleontologist for scale). 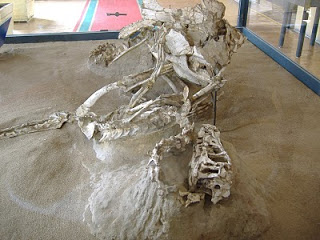