After my Argentinian fieldwork finished up, the crew headed to Plaza Huincal, and the Museo Carmen Funes, home of the giant sauropod Argentinosaurus and the also giant theropod Mapusaurus. I thought I would share some photos of some perhaps less well known Argentinian dinosaurs displayed in their galleries. 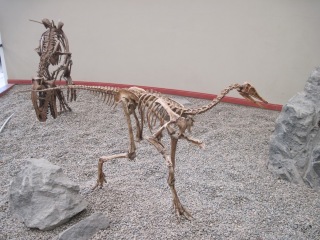 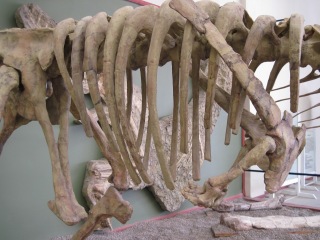 Abelisaurid theropods had really, really reduced arms, with the best example being Carnotaurus (although you wouldn’t know it from shows like Terra Nova). But another good example is Aucasaurus, which also had pretty tiny arms.

And I couldn’t resist snapping this photo of the tail of Aucasaurus, showing those weird hooked transverse processes on the caudal vertebrae that Scott talked about in his last guest post. 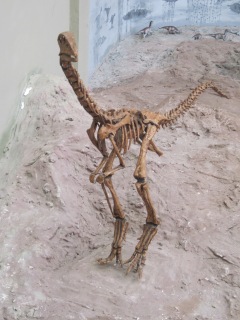 And finally a little love for the little guys. Here’s Anabisetia, a basal ornithopod known from four really nice specimens that I had the good fortune to study while I was there.

Next up, the Museo Carlos Ameghino!