“Cool Stuff: The University of Alberta Museums Do Winter” is a winter-themed exhibit that opened last week at the U of A’s Enterprise Square location. I checked it out last weekend and was pleased to see so many different types of objects on display. We have 28 different collections on campus, and most (maybe all?) were represented in the exhibit – butterflies, moss, picked parasites, textiles, and more.

The University of Alberta Laboratory for Vertebrate Paleontology contributed fossils from our Grande Prairie and Edmonton dinosaur bonebed excavations. Although we usually collect stuff in the summer, we’ve had snow during our Edmonton fieldwork, even in May.

We showed off some field jackets, too. The Monoclonius and ornithomimid are pretty self-explanatory, and if I recall correctly, “Skull B” is from the Wapiti bonebed in Grande Prairie. There were also photos from our December tyrannosaur helicopter lift in Dinosaur Provincial Park, including a photo taken by me! 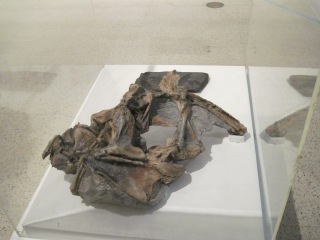 Last spring we purchased a cast of the Cryolophosaurus original non-reconstructed skull for both teaching and research, but it fit in perfectly with the exhibition theme! The grey slab behind the skull is the Wonder Block from the MOTH locality, which has a variety of ‘jawless fish’. Phil will be giving a talk about his 2011 Antarctic expedition on March 1, as part of the exhibition’s speaker series.

The exhibition also features specimens from our zoology collections, including these Arctic and sub-Arctic mammals (caribou, deer, and walrus).

“Cool Stuff” mixes natural history objects with cultural heritage objects, and in particular I was pleased to see so many Inuit and Inuvaliut art pieces. I am always astounded by whalebone sculptures like this one. 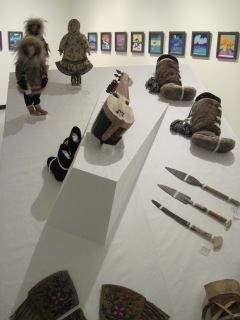 Another display had Inuit dolls, musical instruments, hunting tools, and boots. The beautiful paintings in the background are the original art from Ted Harrison’s “A Northern Alphabet“. Click the photo to make it bigger, and see if you can figure out what letter each painting represents.

“Cool Stuff” is open until March 4, and admission is free. It was cool, go check it out.