I just got back from my first stint of fieldwork for the year, and my first time doing fieldwork in the States. This was just a brief jaunt out to Utah and Colorado for two weeks, but it was a nice sampling of some interesting and different field localities compared to my previous experiences. Today’s post: Crystal Geyser quarry in Utah! 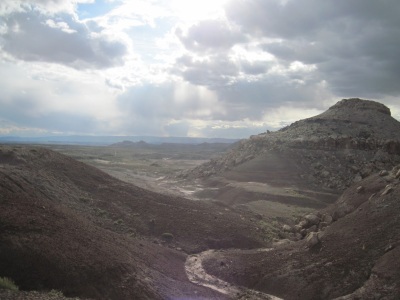 So scenic, so majestic. Such altitude.

Crystal Geyser is a non-geothermal, carbon dioxide geyser near Green River, Utah; although we didn’t visit the geyser itself, it lends its name to a series of quarries of a massive bonebed in the Yellow Cat Member of the Cedar Mountain Formation (about 125 million years ago). The bonebed is mostly composed of the early therizinosaur Falcarius. The bones in this quarry are incredibly delicate – sometimes even using just a brush through the sediment felt like it was too aggressive! Definitely a challenging site to work at. 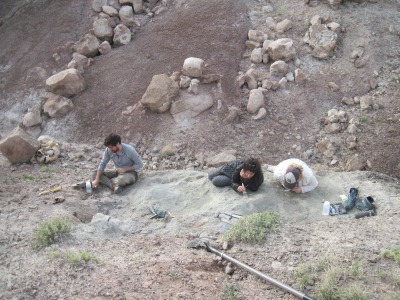 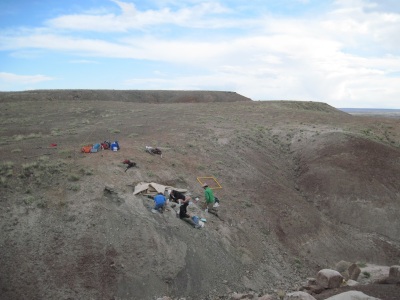 Ominous clouds brewed up frequently and then dumped rain and hail on us.

But then sometimes there were rainbows, so I guess it was ok.

We camped in the Morrison Formation and walked up to the Cedar Mountain Formation each day, which was kind of fun. 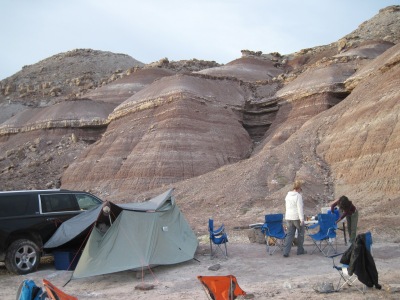 I’m not accustomed to walking through such a dramatic shift in time and faunas: the Morrison is characterized by lots of classic dinosaurs like Allosaurus and Apatosaurus and Stegosaurus from about 156 to 146 million years ago, but the dinosaurs of the Cedar Mountain Formation have only recently begun to receive much attention and are still poorly known. There’s a gap of about 20 million years between the two formations, and in the Yellow Cat Member we find dinosaurs like Falcarius, the ankylosaur Gastonia, the iguanodontians Hippodraco and Iguanacolossus, and dromaeosaurs like Utahraptor and Geminiraptor. The world was changing.

We’ll be returning to Utah later in July to work in the Mussentuchit Member. Up next: jackhammering in the Mesaverde Formation of Colorado!

Epilogue: I made a friend at lunchtime one day. D-: