Last week I got a chance to visit the Field Museum in Chicago for the first time! It’s a great big museum with lots of cool stuff, so I figured I’d share a few impressions from my lunchtime jaunts through the exhibits. Let’s get started with all the fossil exhibits outside of the main fossil hall (there are several, but some of them are kind of hidden away!).

Sue the Tyrannosaurus is most definitely not hidden away, and occupies a place of pride in the museum’s main entrance hall. Sue is undeniably a great fossil, although I (and I suspect probably some other palaeontologists as well) have mixed feelings about this fossil: it’s incredibly well preserved, but the intense backstory to Sue’s acquisition is filled with several unpleasant twists and turns. I’m glad Sue found a home in a museum, but I wish it hadn’t been placed up for auction – Sue’s auctioning may not have directly led to the trend of putting dinosaurs up for auction for millions of dollars, but I feel like it set a bad precedent all the same.

One thing that’s particularly enjoyable about this specific Tyrannosaurus skeleton are the abundant pathologies to be found. Sue has a busted/infected shin, holes in its jaw, and rough bumpy spots on its vertebrae. These vertebrae near the end of the tail have a big mass of crinkly bone around them. It’s obvious Sue got up to some trouble during its life, and it’s interesting to speculate on the causes of the various oddities in the skeleton (and indeed, others have!). 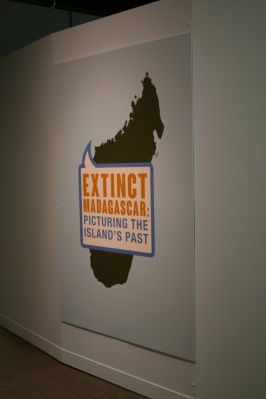 Sadly, this exhibit is tucked so far out of the way that basically nobody had wandered back there besides me (you need to go through the conservation gallery to reach it). It’s also a little bit specimen-sparse, a trend I’ve noticed recently in many museums and which I find somewhat concerning. However, I feel like it makes up for the lack of 3D objects in its cool and unusual subject matter – the extinct fauna of Madagascar. The main point to the gallery was showcasing the social media response to new images of Madagascar’s prehistory, and the scientific process that went into those images. It was an interesting way to approach the topic, but might have been more compelling with video, audio, or more fossils. 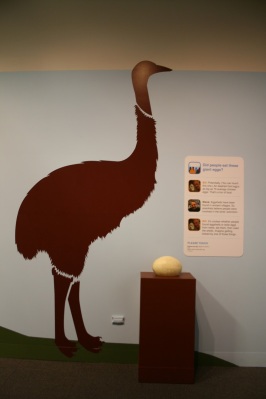 It was pretty cool to see an Aepyornis (elephant bird) egg and life-size silhouette. They really were terrifyingly large and strange birds. 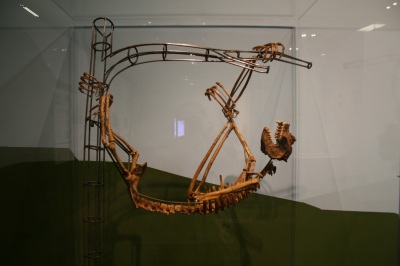 A highlight for me was this Palaeopropithecus skeleton – a lemur that lived and looked like a sloth.

Tracking the Reptiles of Pangea

Tucked away in the African mammals area was a room devoted to palaeontological fieldwork in Tanzania, featuring the newly described silesaurid Asilisaurus! This isn’t a skeleton you’re going to see in most museums – I only wish more people had been stepping into this little exhibit room to check it out.

A nice touch was showing the original fossil material in its cabinet-ready storage foam. Those are some nice fossils.

And one last fossil….

Seriously, how were these machines not in constant use? They’re in the hallway leading towards the bottom-floor cafeteria, and you can get yourself a freshly-made retro Triceratops, Brontosaurus, Tyrannosaurus, or Stegosaurus. I made a Brontosaurus and consider it $2 extremely well spent, especially since it meant I got rid of a bunch of dimes and nickels I didn’t know what to do with:

7 thoughts on “Snapshots from the Field Museum”