Say hello to Cornelius! I got to meet him during a brief visit to the ROM last week, and he seems like a pretty nice guy.

END_OF_DOCUMENT_TOKEN_TO_BE_REPLACED

Yesterday I talked about ‘expected surprises‘ with regards to Yi qi. Yi qi is a surprise because its anatomy is so unlike other theropods, and it suggests that dinosaurs were experimenting with flight and/or gliding in some ways that were quite different from our current understanding of feather and bird wing evolution. But it was also not entirely unexpected, because scansoriopterygids had super weird anatomy to begin with that gave us enough information to speculate about possible gliding adaptations in those dinosaurs, even though the general consensus was that it was pretty far-fetched.

But today I wanted to talk about a related feeling, which I like to call the Failure of Imagination. Last summer I was working my way through a DVD set of classic sci-fi, fantasy, and adventure movies that I had picked up at some point. I wound up watching a lot of these with friends and basically Mystery Science Theatre 3000-ing the films, and in particular the old space adventure movies from the 40s-60s provided much entertainment. It’s really fun to take a look back and see what sorts of things people envisioned the future holding for us – space travel, exoplanet exploration, robots. But what also struck me was the things that the filmmakers and storywriters couldn’t even imagine.

They could imagine spaceships and robots, but they couldn’t imagine wireless technology. Or storing information in digital form rather than on spools of tape.

Voyage to the Prehistoric Planet (1965)

And they definitely couldn’t imagine women in roles other than administrative assistants (or as the bad guys). SO MANY SPACE SECRETARIES.

I kept thinking to myself – what sorts of failures of imagination are we having in palaeontology today? We can imagine so many things. But I wonder what kinds of things we won’t even know we don’t know. When we try our hand at speculative biology, what will scientists 80 or 100 years from now think was charming, or quaint, or ahead of its time. Failures of imagination are one of those things that make me nervous as a scientist, because I don’t like the idea that I won’t even know what I’m not imagining.

I love surprises. Which is unfortunate for me, because I am extremely bad at being surprised. And it’s hard to be surprised by things as you get older, and as easier access to more and more information becomes available to us every day.

But boy, when a surprise comes along that actually takes me by surprise, what a thing to be able to savour.

An extraordinary painting of Yi qi by Emily Willoughby, CC-BY.

END_OF_DOCUMENT_TOKEN_TO_BE_REPLACED

Palaeontology emergency alert! This is not a drill! Brontosaurus is back!

YES I FINALLY GOT TO USE THIS ON THE BLOG. Success!

END_OF_DOCUMENT_TOKEN_TO_BE_REPLACED

Dino Hunt Canada is almost here! Starting this Friday, History Channel Canada will be airing a series of hour-long documentaries devoted to dinosaur expeditions all across Canada – and not just in the famous badlands of Alberta! The production crew visited field localities in Nova Scotia, Saskatchewan, multiple places around Alberta, and British Columbia. It’s going to be a real who’s who and where’s where of Canadian palaeontology.

I’ll be in the second episode featuring work in Dinosaur Provincial Park, which we filmed in 2013. It was a fun if somewhat unusual experience to have such a large film crew with us, and I’m looking forward to seeing the whole shebang!

What was the crew filming in DPP? Tune in to find out!

There’s also a really excellent website to accompany the show. You can learn more about some of the dinosaurs featured in the series (including wonderful new artwork by Danielle Dufault!), see interviews with some of the palaeontologists, and submit ideas for a nickname for a new dinosaur excavated during the show by the Southern Alberta Dinosaur Project. You can even submit questions and maybe have my weirdo face answer them via Skype! All in all, it’s looking really good so far and I’m so happy to see the huge variety of dinosaur research being conducted across Canada by so many talented and hardworking people.

It was a whirlwind year for dinosaur palaeontology, yet again. This week I’m writing about what I consider the most important news in my science field for 2014, for the Science Borealis blog carnival. There are so many great stories to choose from! Kulindadromeus and feather-like structures in ornithischians? The bizarro new reconstruction of a short-legged Spinosaurus? Both of those stories were pretty interesting, but my choice has to be the description of multiple skeletons of the Mongolian ornithomimosaur Deinocheirus. END_OF_DOCUMENT_TOKEN_TO_BE_REPLACED

After a whirlwind couple of weeks with a bunch of international travel, I’ve finally had a chance to sit down and write about my most recent paper on the ankylosaurs of the Baruungoyot and Nemegt formations of Mongolia. I’ve been interested in these ankylosaurs for a long time now, both because of their interesting cranial anatomy and their relationships to the ankylosaurs of North America (especially Alberta). So, here’s a plain-language summary of some complicated taxonomy! Hooray! END_OF_DOCUMENT_TOKEN_TO_BE_REPLACED

There’s a new ankylosaur in town – meet Ziapelta sanjuanensis from the Cretaceous of New Mexico!

Hello, Ziapelta! Many thanks to new Currie Lab MSc student Sydney Mohr for this wonderful life restoration of Ziapelta.

END_OF_DOCUMENT_TOKEN_TO_BE_REPLACED

It’s a wonderful feeling when you get to be part of something that celebrates teamwork.

Yesterday was the opening reception for the University of Alberta’s new exhibit, Discovering Dinosaurs: The Story of Alberta’s Dinosaursas told through U of A Research. The exhibit features the work of almost all of the current people in Phil Currie’s lab, as well as many of our alumni and colleagues.

END_OF_DOCUMENT_TOKEN_TO_BE_REPLACED

Kulindadromeus, a little ornithischian from the Jurassic of Siberia, has the palaeosphere abuzz with talk of fluff, feathers, scales, and all kinds of interesting integumentary goodness. Kulindadromeus has scales on its feet, hands, and tail, but the head, body, and upper limbs are covered in three different kinds of filamentous integument. 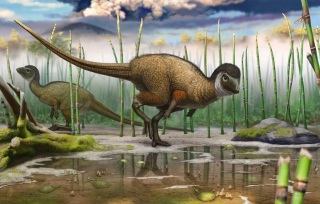