It’s a wonderful feeling when you get to be part of something that celebrates teamwork.

Yesterday was the opening reception for the University of Alberta’s new exhibit, Discovering Dinosaurs: The Story of Alberta’s Dinosaursas told through U of A Research. The exhibit features the work of almost all of the current people in Phil Currie’s lab, as well as many of our alumni and colleagues.

The exhibit focuses in on research projects and new discoveries at the university. You’ll see lots of fossils and casts, but you’ll also see plenty of panels like this one featuring my work on ankylosaur tail clubs. (To see more of the folks in our lab featured in the exhibit, check out the DinoLab’s Facebook album.) I really like this approach, because it shows that science is done by real people, and it shows the specific kinds of questions that we ask in order to tell the bigger stories about dinosaur lives. How DO we find out if ankylosaurs used their tail clubs as weapons? What kinds of techniques do we use? What surprises do we encounter as palaeontologists? 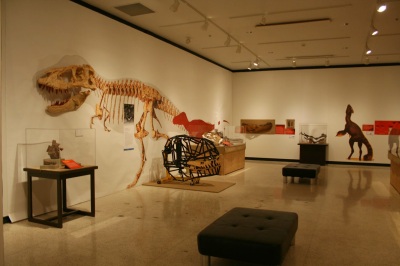 There’s so many great stories in the exhibit, and I think the focus on dinosaur parts rather than full skeletons means we get to focus on the subtler bits of anatomy that might be missed in a room full of giant skeletons. (Not that I don’t like a good room full of skeletons!). The exhibit is divided into several themed rooms – this one is obviously the theropod shrine, but you’ll also get to see ankylosaurs, hadrosaurs, ceratopsians, and birds, and some non-dinosaurs, too!

Even vertebrate microsites get some love in the exhibit.

I think this is particularly fun – take a peek inside our camp kitchen tent in the Mongolian fieldwork room, and see some film footage from the early days of collecting at the university and from more recent work in the PALEO 400 field school at the Danek Bonebed.

Edmonton-based palaeoartist extraordinaire Julius Csotonyiprovided much of the art you’ll see throughout the exhibit, including life-sized restorations of the species featured in the exhibit. I think this is really effective – the specimens are the data, the research stories are the process, and the art shows how it all comes together in the end to reconstruct these extinct animals.

It’s really cool to see some of the specimens I’ve only known as trays in cabinets come to life as full skeletons. On one level you ‘know’ how complete a skeleton is, but it’s still a bit surprising, even to me, just how good some of our specimens are. We have good fossils, you guys!

This will probably sound corny, but it was somewhat emotionally moving for me to see UALVP 31 all laid out and on display. This was one of the most important ankylosaur specimens for my work on revising the taxonomy of Euoplocephalus, and I did a lot of the prep work on the postcrania in conjunction with my colleagues Mike Burns, Robin Sissons, and Kristina Barclay, and with WISEST summer research students Carmen Chornell and Idel Reimer. (See what I mean about teamwork?). We also added in UALVP 47273 waaayy down at the other end, the tail club that Phil Bell found the year before I joined the lab and which was super important for my work on tail club biomechanics.

I’ll finish off here, but know that this is only a tiny sampling of what’s in store for you at the exhibit. I hope you’ll check it out and learn something new. Discovering Dinosaurs is on display at the Enterprise Square Galleries in downtown Edmonton from now until January 31st, 2015. There’s a great series of K-12 education programs associated with the exhibit, as well as a fun program of speakers and events for the general public over the next few weeks (if you want to hear more about ankylosaurs, I’ll be speaking on September 27th!). You can also check out our permanent exhibit in the Paleontology Museumin the Earth and Atmospheric Sciences Building on campus. Not in Edmonton? You can still join the fun with Dino101, our massive open online course that’s currently underway at Coursera.