The Canadian Paleontology Conference I attended over the weekend was held at the University of British Columbia campus in Vancouver, and the public lecture, talks, posters, and banquet were all held in the Beaty Biodiversity Museum. 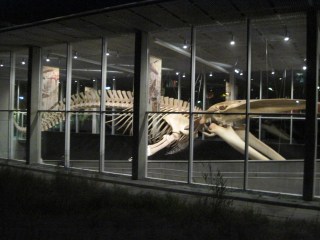 The museum is actually mostly underground, but the ground-level glass atrium is definitely eye-catching! Inside is a suspended skeleton of a 150-foot blue whale, Balaenoptera musculus. It’s particularly striking at night.

Once inside, you can view the skeleton from pretty much every angle except dorsally; a ramp runs on the right lateral side down to the galleries. At the end of the talks, we dined on salmon at tables under the whale! 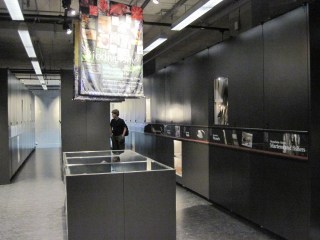 UBC is doing some really innovative things with regards to museums and collections. The Museum of Anthropology, which I visited last year, was the first to renovate its gallery space to include the entire collection. The Biodiversity Museum has followed suit, and the exhibits sit within the collections! It’s a pretty good way to kill two birds with one stone, and is a space-efficient (and I’m assuming cost-efficient) way to display specimens. Every few feet one of the storage cabinets has been converted into a display case, and there are a few strategically-placed gaps in the rows to allow for some different display cases. The cases in the middle of this photo had displays about how specimens are collected, and you could pull out the drawers to see more specimens. There were also a couple of interactive kiosks, my favourite being the display about algae. The table had two shopping baskets and a variety of packaged food products; the goal was to separate out the food that had algae in it and the food that didn’t (spoiler alert: all but one product had some sort of algae in it!). It was a cool way to teach people about these unappreciated organisms!

What’s also great about the museum is that it features all kinds of interesting organisms. The displays include mammals, birds, fish, reptiles, lots of different invertebrates, plants, fungi, and fossils. I really liked the way fossils were incorporated into the exhibits – in the appropriate region of the collection, glass floor panels showed the fossils ‘in the ground’, like this school of fish from the Green River Formation. 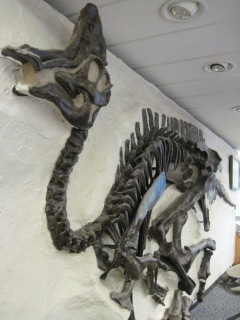 I’m cheating here because this photo is not from the biodiversity museum, but from the Pacific Museum of the Earth (in the Department of Earth & Ocean Sciences) across the street. I had to put it in, because it reminds me how Alberta dinosaurs wind up everywhere. This Lambeosaurus was collected from Dinosaur Provincial Park by the Sternbergs in the 1920s, and is on permanent loan from the Canadian Museum of Nature (and yes, it’s real, not a cast).