I’ve just returned from the Canadian Paleontology Conference, which was held at the University of British Columbia in Vancouver, BC. I participated in the field trip to Vancouver Island, where we explored Nanaimo Group outcrops. Gwawinapterus was collected from Nanaimo Group rocks on Hornby Island, and although we didn’t get out to Hornby, we did check out several other formations and localities. Here’s a few highlights from the trip!

After taking one of the ferries from Vancouver to Nanaimo, we stopped at Departure Bay. During the day we’d be working our way up through the Nanaimo Group and therefore into deeper water environments. The Haslam Formation outcrops here and represents a shallow marine environment.

We saw some really great inoceramid clams at Departure Bay.

Next stop was Englishman River Falls Provincial Park, a beautiful spot. Didn’t find many fossils, but I enjoyed the waterfall very much! 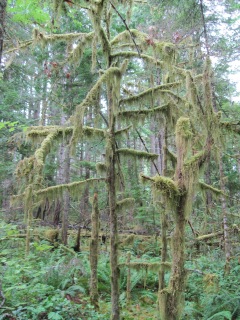 We also enjoyed the lushness of the temperate rainforest. 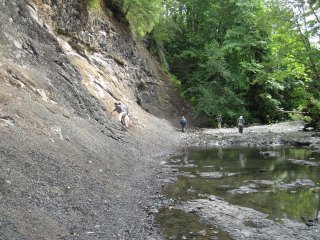 We next headed out to Trent River, a popular place for amateur collectors. Here the Pender Formation crops out, as well as the Comox and Haslam Formations. Abundant nodules contain ammonites, bivalves, and other invertebrates. Elasmosaurs, mosasaurs, and turtles have also been found near this locality! (See more about the Puntledge River elasmosaur at the Courtenay Museum.) These outcrops represent deeper water facies including turbidites.

Pete tries his hand at cracking open a nodule.

We finished the day off with a stop at the Qualicum Beach Museum, which features a nice display of fossils collected in the area as well as casts of specimens from all over the world. A cast of the Gwawinapterus holotype is also on display here!