Well it took way longer to get to the third and final part of this little post series, but I guess that’s what happens when you’re moving ‘internationally’ while preparing for a conference. C’est la vie! Let’s get to it:

North Carolina’s coast is almost completely framed by a series of barrier islands called the Outer Banks. In a sense, NC gets *two* coastlines – the coastline opening onto the sounds enclosed by the barrier islands, and the coast that opens onto the angry angry Atlantic Ocean. 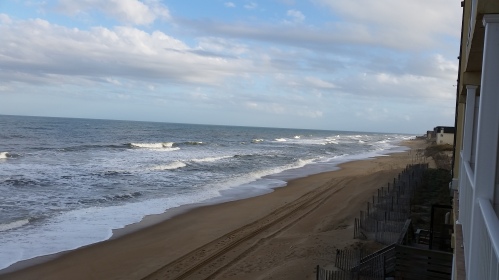 END_OF_DOCUMENT_TOKEN_TO_BE_REPLACED

Next up on our NC geology road trip, we’re stopping on the Piedmont. A big swath of central North Carolina is represented by this physiographic region, which basically equates to the foothills of the Appalachians. I think I have made some people very confused when I’ve pronounced this in the French way that it looks to me, damn my Canadian upbringing, but apparently it sounds like PEEEEEEED-monT.

This is going to be a bit of a metaphorical road trip stop because most of the middle of North Carolina looks like this: 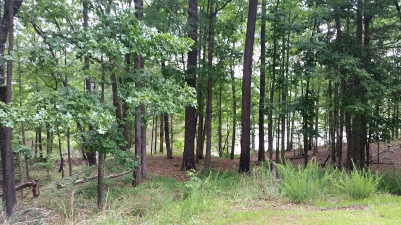 I was reminded of an old post on this blog today when someone brought up the all too common question of “Is that real?” in museums. In 2011 I had visited the Smithsonian natural history museum for some of my Euoplocephalus research, and spent a day browsing the galleries and shamelessly eavesdropping on people’s conversations. I was dismayed by the number of people saying things like “What’s that!” and then walking away without finding out, or saying “Look, a T. rex!” to things that were patently not T. rex. In the comments on that post, there was some discussion of the fact that visitors to museums often mistake any skeleton as a dinosaur skeleton.

Anyway, that in turn reminded me of a photo I took in the Nova Scotia Museum of Natural History‘s marine gallery a while ago:

Despite being surrounded by all manner of marine specimens, including a fleshed out model of a sei whale up above, the museum has to explicitly say that a pilot whale is not a dinosaur. In fairness, the museum (sadly!) does not have any dinosaur skeletons, what with Halifax being located on top of the Cambrian-Ordovician Meguma Terrane, and with the Fundy Geological Museum fulfilling the role of the dinosaur-having museum in Nova Scotia.

What lessons can we learn from this?
1. Museum people: put a dinosaur in your museum. There’s no excuse not to have one.

2. Everybody else: many animals have skeletons besides dinosaurs.

*Bonus! Sable Island is a super neat place that not many people have heard about outside of the maritime provinces – you can read more about it at their National Park page!

The first offering of Paleo201, Dinosaurs in the Fossil Record, essentially comes to an end today with the final field trip of the semester. The students will have their exam later in December.

Even though it is a lot of work to be involved in the creation of a new course, I think Paleo201 is a great addition to the University of Alberta’s paleontology offerings. Using the Dino101 content on Coursera, and pitched at an essentially first-year level (despite its 200 designation) for students from all faculties, Paleo201 is what’s called a blended learning course. We rely on the Dino101 course videos to deliver the base lecture content for the course, which means we typically only meet once per week for an in-class lesson. These lessons have included research talks by grad students in our labs on topics relevant to each week’s lesson. However, we also tried to break away from the lecture format for at least some of the in class lessons, to take advantage of some of the resources available on campus. One week we learned the basics of the rock cycle and general Canadian geology using the Department of Earth and Atmospheric Sciences Geoscience Garden, an installation of rocks from around Canada arranged in a particular fashion for students to learn basic mapping skills. And last week we did tours of the Paleontology Museum and our prep labs, including sneak peeks of some cool up and coming research projects. FUN FACT: Our Dunkleosteus skull cast was ranked higher than the dinosaur specimens in my highly scientific ‘what did you find most interesting’ poll. Blindingly obvious take-home message for instructors: Students like new things and surprises, and dinosaurs are not necessarily the be-all and end-all!

END_OF_DOCUMENT_TOKEN_TO_BE_REPLACED

Last week I returned to Happy Jack’s at Dinosaur Provincial Park for a brief stint of fieldwork. This has been the University of Alberta’s base camp since 2008, and the area has been very productive for us. END_OF_DOCUMENT_TOKEN_TO_BE_REPLACED

This summer, the Royal Ontario Museum unveiled a brand-new exhibit all about the dinosaurs of Gondwana. When Pangaea rifted apart during the Triassic, it split into two continents – Laurasia, represented by the modern northern continents of North America, Europe, and Asia, and Gondwana, represented by the modern southern continents of South America, Africa, Australia, and Antarctica, plus India, Madagascar, and New Zealand. The dinosaurs and other extinct terrestrial vertebrates of Gondwana differed from their northern neighbours, and we don’t often see them in exhibitions in North America.

Ultimate Dinosaurs: Giants of Gondwana features lots of interesting and sometimes obscure dinosaurs, some really great artwork, and some neat technological things (of which I am sometimes skeptical, but can wholeheartedly endorse here).

END_OF_DOCUMENT_TOKEN_TO_BE_REPLACED

Comment 2: How do we know the tyrannosaur came from Mongolia? (and the related question, which I’ve decided to lump with this one: Why does the auction company, and subsequent news stories, refer to the specimen as Tyrannosaurus bataar while palaeontologists call it Tarbosaurus? END_OF_DOCUMENT_TOKEN_TO_BE_REPLACED

Today I’ve got five questions for Federico Fanti, the lead author on a paper published a few weeks ago in PLoS ONE on a nesting oviraptorosaur. I first met Federico during the 2007 Nomadic Expeditions Dinosaurs of the Gobi expedition, in which we all had a grand time prospecting for dinosaurs and during which we celebrated a fine discovery indeed. END_OF_DOCUMENT_TOKEN_TO_BE_REPLACED

On my way home from Buenos Aires I had an eleven hour layover in Houston. Having just about exhausted the entertainment potential of the Houston airport on my nine hour layover on the way down, and feeling quite confident that there was no way I could stay awake the whole time if I stayed in the airport, I decided to venture in to Houston to poke around for the day. I managed to visit the Houston Museum of Natural Science and the Houston Zoo, which are both located in the immensely pleasant Hermann Park. 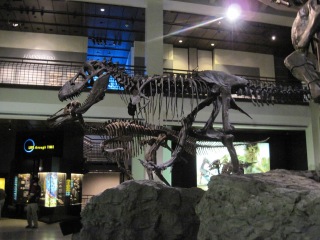 END_OF_DOCUMENT_TOKEN_TO_BE_REPLACED

I’ve just returned from the Canadian Paleontology Conference, which was held at the University of British Columbia in Vancouver, BC. I participated in the field trip to Vancouver Island, where we explored Nanaimo Group outcrops. Gwawinapterus was collected from Nanaimo Group rocks on Hornby Island, and although we didn’t get out to Hornby, we did check out several other formations and localities. Here’s a few highlights from the trip!