On my way home from Buenos Aires I had an eleven hour layover in Houston. Having just about exhausted the entertainment potential of the Houston airport on my nine hour layover on the way down, and feeling quite confident that there was no way I could stay awake the whole time if I stayed in the airport, I decided to venture in to Houston to poke around for the day. I managed to visit the Houston Museum of Natural Science and the Houston Zoo, which are both located in the immensely pleasant Hermann Park.

The museum has a nice dinosaur hall featuring this Tyrannosaurus about to maul an Edmontosaurus to death, a Diplodocus, and an impressive Quetzalcoatlus. The museum is building a new dinosaur exhibit, and although I was sad I did not get to see it (it opens this summer), it was good to see their current display.

I also really liked this detailed information panel that showed not only which bones were real, cast, or sculpted, but what specimens they were derived from.

Whatever your feelings on the oil industry, there is no doubt that geology plays a hugely important role in locating and extracting petroleum resources. It is fitting that the Houston museum would have a large and informative gallery on petroleum. To be honest, when I looked at the museum map and saw this, I was pretty sure it would be super boring, and my background is in geology and I like stratigraphy a lot. But lo! It was tons of fun! And there were a lot of people there enjoying themselves, too! The gallery starts with a lot of geology, then moves on to the engineering side of things. I thought the introductory exhibit on stratigraphy was pretty cool – different features on this big faux rock face lit up as the narrator discussed them. 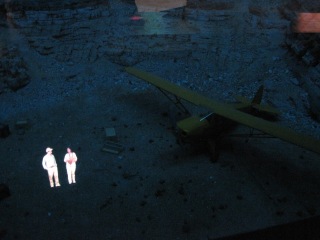 There was a cool window display showing two geologists discussing life in remote field locations. This was a pretty neat trick, because the video of the two geologists was projected onto a nearly invisible piece of glass or plastic such that they looked like they were right in the diorama. Also there was a lady geologist, HOORAY!

And there was even a giant seismic reading printout! Where do you ever see this sort of thing? Next to this was a tank with a seismic air cannon that would go BANG! every few minutes. Not too much discussion of how this affects marine life.

If I had a criticism of the gallery, it was that there was not a whole lot of discussion of the dangers of petroleum exploration and extraction or the environmental damage caused by burning fossil fuels. But we hear about that in a lot of other places, and it was so refreshing to see the science on exhibit, that I guess I will forgive them for that.