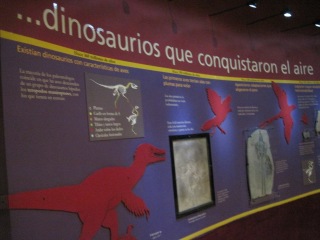 After finishing up with the dinosaur hall at the Buenos Aires natural history museum, I was pleasantly surprised to find more dinosaurs when I headed upstairs. I can’t recall a time where I’ve actually seen dinosaurs in the bird gallery – often the dinosaur story ends with the origin of birds, but when the birds are on display it’s usually more about extant bird diversity and conservation. So it was really nice to see the origin of birds explained right at the very beginning of this exhibit. 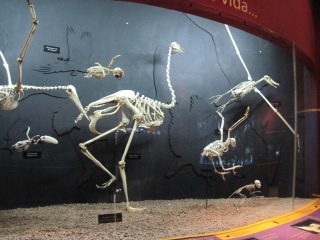 Right after the origin of birds we are treated to this display of extremes in bird skeletons, which really highlights the adaptations for particular lifestyles in different groups: the long, long wings of albatrosses, the oversized feet of raptorial birds, the hilariously gigantic heads of toucans and parrots, and the long legs and short arms of ostriches. They have also cleverly placed a hummingbird in front of the ostrich to highlight the great size range of extant birds. 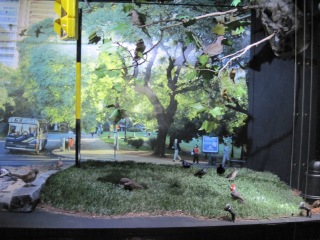 Lots of museums have exhibits displaying birds of different habitats, but not as many include urban environments. I guess Argentina is also lucky for having such a wide array of interesting and colourful backyard birds, but I think this is something that could be done in a lot of museums. This is also particularly helpful for people who are just visiting the city who like to keep track of their birds, but don’t get out into the countryside for the more ‘exotic’ species. 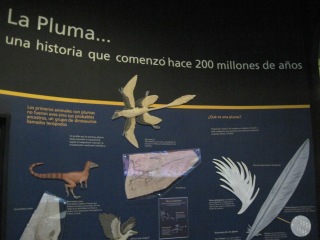 Fossils make an appearance yet again when we get to the function and diversity of feathers. There are casts of Sinosauropteryx, Microraptor, and Caudipteryx. Again, you don’t often see a lot about the evolution of particular traits within exhibits featuring extant animals, so this was nice to see. 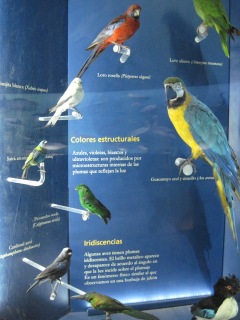 I love visiting the bird exhibits in most museums for the sheer ‘ooh! cool! pretty!’ factor, and there is certainly a lot of that here. But the weird and wonderful structures found in modern birds is organized such that you can learn a lot while still marveling at all the strangeness. For example, there are sections discussing how different colours are produced, how feathers on the body vary and what their functions are, and how feathers are modified to form display structures. 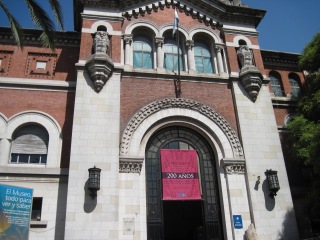 There’s so much I love about this gallery that I could just go on and on. I’ll finish here with a photo of the entrance to the museum, guarded by a pair of wise and watchful owls.

One thought on “Birds at the Museo Argentino de Ciencias Naturales”