The last two months could safely be called the Spring of Travel, with me hopping on an airplane to somewhere new almost every other week it seems. It’s time to start catching up on some of this fun travel before any MORE happens, so let’s take a trip out west to Grande Prairie, Alberta! 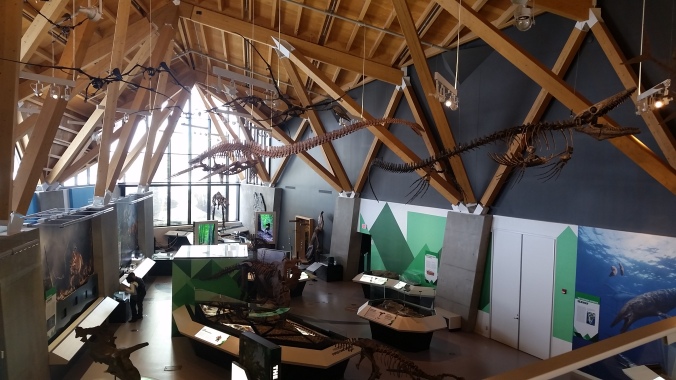 My old grad school buddy Derek Larson invited me to give a talk as part of the speaker series at his museum, the still almost brand new Philip J. Currie Dinosaur Museum, which opened in the fall of 2015. This was my first chance to really take in the museum, and it’s got stunning architecture, cool specimens, and some really neat interactive elements. We enter the galleries on an upper level that gives a great overview of a bunch of the museum’s displays. The focus is on dinosaurs and other Mesozoic animals found in northwestern Alberta, and there’s no shortage of cool stuff on hand.

The upper level also features a reconstruction of the Pipestone Creek Pachyrhinosaurus Bonebed, a colossal horned dinosaur deposit that was the impetus for building a museum in this corner of Alberta. The small carnivores Troodon and Hesperonychus pick over the remains of Pachyrhinosaurus.

Before heading downstairs, don’t forget to take a peek into the fossil prep lab, which has this extremely cool floor window that lets you look directly down onto the fossils being cleaned up. I’m too chicken to stand all the way on it but I stuck my toes on for scale. 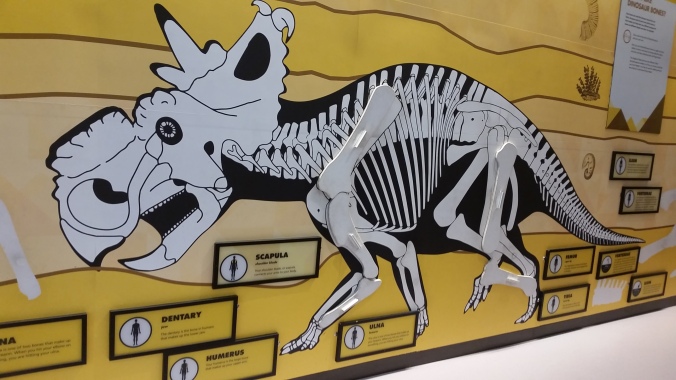 Down on the main level are lots of really engaging displays about the process of doing palaeontology – there’s a dig pit, microscope stations, examples of field jackets, and even a sadly vandalized specimen as an example of what can befall fossils when we don’t look out for our fossil heritage. I particularly like this giant Pachyrhinosaurus skeleton with magnetic bones for you to put in place! 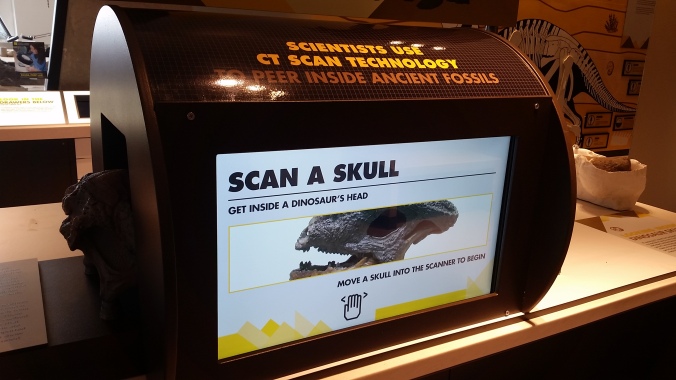 This is another fun interactive – an ‘X-ray scanner’ where you can slide casts of an Edmontonia skull or Stegoceras skull inside and then see a 3D model appear on the screen. I contributed the 3D Edmontonia skull you see on the screen if you choose to scan that skull! The original skull hangs out in the University of Alberta Laboratory for Vertebrate Paleontology collection.

Another fun station is this palaeontologist tickle trunk, featuring the gear we might need to look for fossils in different environments! 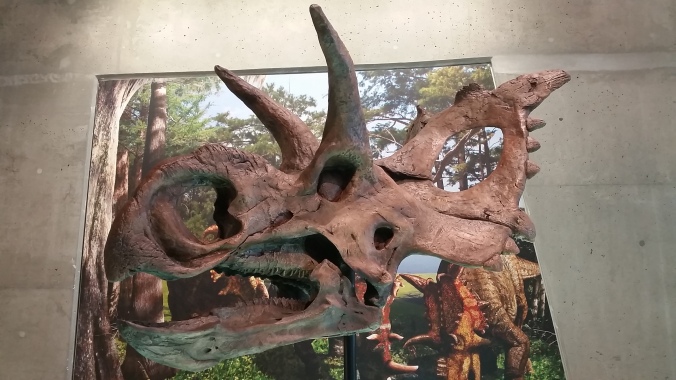 It’s not all Pachyrhinosaurus in the museum, and there are plenty of really nice full skeletons and skulls to peruse on the main level, including duck-billed dinos, tyrannosaurs, and several new and unique horned dinosaurs like this Xenoceratops.

The base of the ceratopsian skull plinths feature this really simple but effective slider where you match up the skull with outlines around the base in order to figure out which species you’re looking at (this one features Albertaceratops).

This is also your only opportunity to see the incredible cock’s comb Edmontosaurus that I helped describe back in 2013 – it’s a truly amazing specimen preserving a soft-tissue crest on an otherwise ‘uncrested’ hadrosaur, and it’s the only one of its kind in the world.

I gave my talk in the Ackroyd Family Theatre, which features these beautiful abstract dinosaur skeletons on the walls.

Thanks again for the invite out to the museum Derek, and for the rest of you, don’t miss this museum next time you’re in Alberta – it’s within a reasonable driving distance from Edmonton and in the summer there are also opportunities to go out and see some of the nearby fossil sites where stuff in the museum was discovered!

Next time: we hop across the pond!

*Also I got this really rad shirt I hope you’re all jealous: