My food adventures did not end when I left Korea – I have had many opportunities to try new things while in Beijing in Liaoning province, and have added several new meats to my ‘animals consumed’ list, including donkey, pigeon, and crocodile. Here are a few of the more memorable dishes that Scott and I tried. 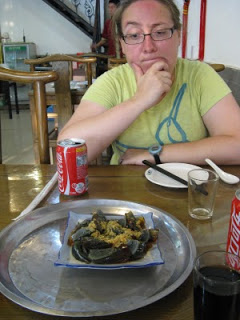 Thousand year egg is an egg that is buried in clay and lime and left to sit for several weeks. The yolk turns a dark greenish-brown, and the white becomes a brown jelly. It looks awful, but it mostly just tastes like egg, surprisingly. 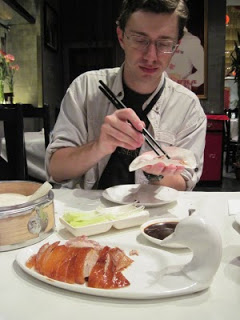 All the guidebooks say you have to try Peking duck while in Beijing, so we did. It’s really tasty! Slices of crispy duck are brought out on a little duck platter (and sometimes the head is thrown in, just for fun as well), and you wrap up duck, leeks, cucumber and sauce in a little flatbread. Quite nice!

At a little street market off of Wangfujing Street, we saw lots of interesting things for sale, including skewered scorpions and starfish. The scorpions on these skewers were still alive and wiggling away…

We were not brave enough to try these.

Another real treat was this delicious spiced garfish!

One thought on “Chinese Food Adventures”